It´s not only about beer:

Pilsen – surely, everybody knows the world famous and tasty beer Pilsner Urquell. Yet the West Bohemian Metropolis including its surroundings has a lot more to offer. Just come and admire the nearby historical small towns with us (such as Loket, Klatovy, Domažlice). Nicely refurbished, worth seeing at any time. Nor can a trip to the famous spa triangle be left out. The majestic Carlsbad and the noble town of Marienbad invite you to go for a walk down the spa colonnade or to take a coffee break.

Briefly welcoming the guests with a welcome beer in the hotel restaurant, joint dinner.

Today, you have plenty of time to experience the City of Pilsen, the West Bohemian metropolis and the fourth largest Czech city. You will see, among others, the Pilsner Synagogue (the third largest in the entire world), the world-famous St. Bartholomew Cathedral with the highest church tower in the Czech Republic, the wonderful Municipal Theatre and many more. For sure, you will also pay a visit to the world-famous Pilsner Urquell Brewery. During your brewery excursion, there will also be a beer tasting. You will enjoy a small lunch break including draught beer directly within the Pilsner Brewery. In the afternoon, you will have the opportunity to visit the largest and oldest brewery museum in Europe. There´ll be leisure time in the late afternoon. You can go to several museums or galleries.

In the morning, you will go on a sightseeing tour through Karlovy Vary, on which you will see the world-famous Market Colonnade, the Spring Colonnade and the Chateau Colonnade as well as the traditional Russian style building St. Peter´s Church, the St. Paul´s Church and Maria Magdalena Church as well as the mighty building of the Emperor´s spa. Alternatively, you may visit the Becherovka Museum in the liquor factory where you can also taste this speciality. Afterwards, you will also visit the Moser Museum and its glass factory located on the outskirts of the city. In the afternoon, your bus will shuttle you to the historical town of Loket where you can experience the unique medieval ambience. Afterwards, you will go to Mariánské Lázně. Your tour guide will show you the numerous springs, the Central Colonnade, the Goethe Museum and the churches located in this peaceful and pleasant city. After your return journey to your hotel in Pilsen, there will be dinner and music including a folk event – there will be a performance of a children’s singing and dancing group.

In the morning, you will first travel to the Chodenland ‘capital’ of Domažlice. The wonderful town square with its arcades represents something special, which has only rarely been preserved in the West Bohemian Region. There is the Church of the Nativity of Virgin Mary in the city square with its cylindrical, approximately 60 cm tilted Leaning Tower. Also, the church in the Augustine monastery area and the monastery itself are worth seeing. The former king’s castle which houses the Chodenland Museum now is inviting you as well. Following a short drive, you will reach the Town of Klatovy and unexpectedly stand in front of a unique baroque pharmacy, called ‘The White Unicorn Pharmacy’. This pharmacy has been in the market square ever since the 17th century and had been fully in service until 1966, when it was transformed into a unique pharmacy museum. Here, you can get a glimpse of the mythical unicorn, after which the pharmacy was named. The entrance to the 17th century catacombs is located near the pharmacy, erected in the cellars of a Jesuit Church. Predominantly, members of the Jesuit order were buried here and until now, one can see dozens of mummified corpses in here. You will visit the city of Nepomuk, the birthplace of John of Nepomuk (born in 1350). Admire the church consecrated to him and located on the spot where his parents´ house had been standing. This is followed by a short excursion to the city and to the pilgrim church and afterwards, there will be a tasty Bohemian-style dinner in the Original Švejk Hotel ‘Zum grünen Baum’. The music duo for singing and dancing mustn´t be left out as it provides for a top mood at the end of the journey. You will then journey back to the hotel.

After breakfast, you will travel back to your home towns again.

Visiting the castle will show you how people dwelled and lived in a castle in times when the medieval era was replaced by the renaissance. You will see not only the reception hall, a chapel, a festive room and the weapons chamber, but also rooms where everyday business surrounding the nobility took place – the office of an administrative worker, the cellar, the guard chamber or the so-called black kitchen. 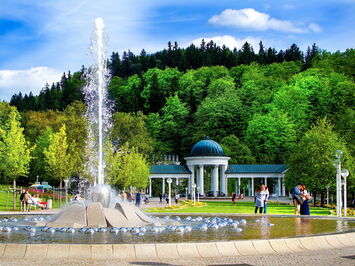 Prague from the height 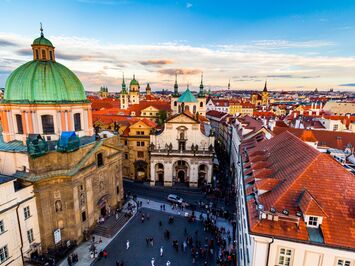 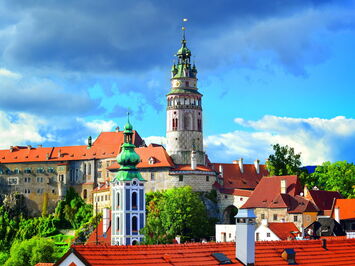